Although the armatures and servo-controlled eyeballs beneath the skin may be fascinating, Beware the Ides of March, and robot teachers with scary rubber lips!

With all the press surrounding the schoolteacher robot named Saya (developed by Hiroshi Kobayashi), you would think that the Singularity is upon us, but upon closer examination it looks like we will be loping along in the Uncanny Valley for a long time to come. In the photo series that appeared in the Boston Globe recently, it was apparent to me that loose rubber lips do not a rose make.

The poetry that comes to mind is not Sleeping Beauty’s “lips that shame the red red rose,” but rather Paul Verlaine’s Colloque Sentimental:

Their lips were colorless, and dead their eyes;
Their words were scarce more audible than sighs. And yet, what of the humans who operate the Bunraku Puppets? The master puppeteers who show their faces while working the strings, and their small band of black-clad ninja assistants, who move around the performance like whisps of silent smoke. Aren’t those humans rather uncanny? Where would they fit along the scale? I’d put them someplace closer to prosthetic hands than the puppets themselves. 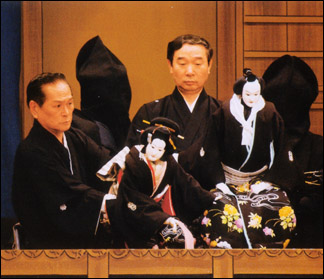