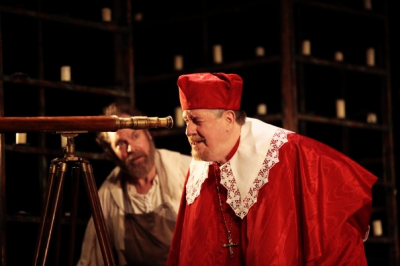 Sophia and I were lucky last night because our friend, MaryAnn, scored some great tickets to the Preview show of “Two Men of Florence,” the first play by Richard Goodwin. We ended up in the first row center orchestra seats, actually, right in front of the author. Thanks, MaryAnn!

It’s an intriguing play, which pits the scientific passion of Galileo against the vainglorious pursuits of Pope Urban VIII, who attempts at first to bring a “dialog” of ideas into the Church — owing to his magnanimous benificence — but later realizes that he has accidentally opened the gates of Reason which threaten the very foundations of a Church built on absolutist devotion. The sets of the play are remarkable, including a latticework of walls full of candles, and circular center stage upon which revolve the desks, chairs, and armatures of Galileo’s inventions. A semi-transparent curtain is occasionally whisked around this center of action, sometimes serving as a projection screen, or an effective scene changing device. The staging and movements are delightfully paced, with nary a figure making absurd entries and exits on wires or wheeled pavilions.

The performances were excellent as well, not only the two lead actors, but also the supporting cast. The Pope’s friend and confident , and Galileo’s daughter, were especially standouts, in particular the moments when the daughter sings in Latin. Jay Sanders’ Galileo is fiery and sensitive, managing to convey his love of philosophy and the natural order of things without sounding snobbish or boorish. The rich language provided by Goodwin really shines through here, giving Sanders a line like this:

‘The moon. Full-bottomed Eve. Crafted by God as comfort to the fugitive earth. Let me see if I can peek beneath the hem of your borrowed radiance.’

The vocabulary and clear enunciation combine for an enjoyable story, which gradually builds up the tension until the character of Pope finally snaps and decides to destroy all of the scientist’s published works. Galileo, in order to save his own life, capitulates to the Inquisitor, but in the final confrontation between the two men he still defends his own view which is that the science of logic and reason are not inimicable to his own faith. But the Pope, furious at the thought that he has let a genii out of the bottle demands that Galileo repent his ideas. “Would you erase men’s minds?” Galileo laments. “Yes, if I can,” replies the Pope, “if it is not too late.”

But this brings up my only criticism of the play, namely that it is certainly too late! Have we not had enough of the idiotic belief systems of ancient times, throttling and strangling scientific progress? Weren’t the 1,000 years of the Dark Ages enough, the Inquisition enough, the 400 years that it took the Church to apologize for the treatment of Galileo enough? Isn’t it, in fact, far too late to be arguing these points? As the world of humans — a ravenous lot of greedy pigs — goes on destroying the resources and very planet that we need for survival, haven’t we had time to get past all of this belly-aching and agonizing over what the Pope thinks?

Well, don’t let this put you off the play; it really is terrific and you should see it if you have the chance! Indeed, the evidence of my reaction is enough to demonstrate that Goodwin’s script is a success, for it is only designed to bring out debate on these topics of belief and of reason, which is a good thing. I just can’t help but gripe about the fact that mindless, uncomprehending adherents have so gummed up the works of our nation and its progress, that the President actually has to sign executive orders demanding that religious beliefs not interfere with the conduct of scientific research! As if such a thing is not totally obvious, not completely necessary, not elementary to any real grasp of the mess we are in to begin with… But there you have it, a wonderful play for the cogniscenti to tittle over and to remark upon over the tinkling ice of their highballs… when what we really need is something like Marat / Sade!