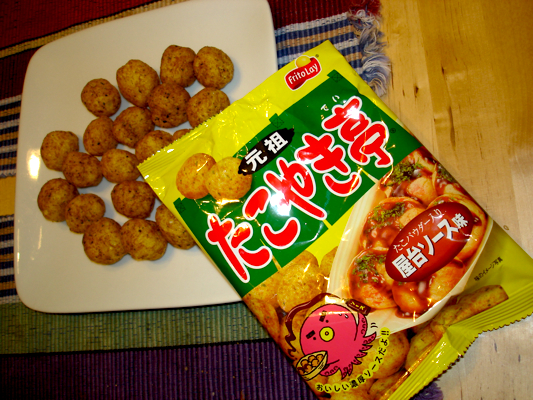 There is nothing like a platter of hot takoyaki octopus balls, one of the most beloved snack foods in Japan. Something about the half-cooked, gooey, pancake-like sphere, slightly browned on the outside, with little rubbery bits of chewy octopus tentacles inside, that simply drives Japanese people crazy with delight! These snacks are not always served in splendidly decked out shops like the Red Devil Takoyaki House of Namba, Osaka. Typically they are vended from funky little carts found alongside bus stations, baseball stadiums, or tourist spots. A little paper dish of those fresh grilled octopus balls, dribbled with sticky brown sauce (with a soya tang), is almost irresistible in the land of the Rising Sun…

How great to know that you can now enjoy this sensation anywhere — well almost anywhere — thanks to the Frito Lay corporation, who have packaged up a neat ersatz version. The Frito Lay takoyaki tei (“grilled octopus stand”) boasts of a super thick, delicious “sauce,” depicted as flowing in an airborne swirl over the head of a prototypical uber-cute pink octopus cartoon. For some reason that floating swirl of sauce — frozen in mid-air — recalls the image of the girl being launched into freeze time as she crashes her scooter in Kamikaze Girls.

The fact that the actual product is some kind of genetic half-breed of a Funyon and a Shrimp Chip, laced with sparkling flecks of MSG and aonori powder, and is completely dry seems not to bother the marketing folks one bit. Indeed, they know perfectly well that anyone crunching a mouthful of these cheese-puff style octopus balls will succumb to an instant case of cottonmouth so intense that they will scramble wildly for the nearest bottle of beer or sparkling water.

Even so, it was a super special treat to try a pack of these, graciously given to us by our friend Kumi, who had them airlifted in all the way from Tokyo! Thanks, Kumi, fun munchies!