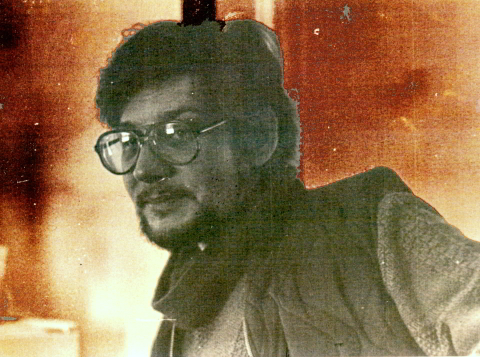 Who was R.T. Gault? As the editor of numerous websites on a range of subjects from literature to magic and the occult, Gault’s work became a magnet to seekers of esoteric literature. Gault’s essays and photographic galleries on the Tarot, Arthur Machen, and the Order of the Golden Dawn were extensions of his most ambitious work entitled Absolute Elsewhere, which was nothing less than a master list of all the visionary, esoteric and fringe works published in America during the second half of the 20th Century.

Although extensive, Gault’s bibliography is not exhaustive — the works he selected and arranged in a year-by-year chronology and in order of their appearance — were carefully chosen and arranged. When viewed in sequence, the works capture an intriguing hidden history of American letters. Like a spider weaving an invisible web, Gault created a tapestry of strange, mind-bending, and mystical ideas, at once recognizable to those who have read the books being cited, and at the same time serving as a guide for newcomers. But who was R.T. Gault, anyway?

No sooner had I become a casual addict of his website, Absolute Elsewhere, did the site vanish. After months of digging, I could find no information about R.T. Gault, and more than a year elapsed before I discovered that Gault was desceased. At that time, my attempts to find someone who knew R.T. Gault were fruitless, leading only to an obscure reference to Centaur Books and Comics in Tullahoma, Tennessee. Eventually, I decided to post my reconstruction of the _Absolute Elsewhere_ website, which I launched on New Year’s day 2010.

Subsequently, I began to receive enthusiastic thank you emails from readers who had lost track of Absolute Elsewhere and were happy to see it back online. One of these messages came from Karen Price, who was married to R.T. Gault. It was a great to finally have a tangible lead to the mysterious editor of Absolute Elsewhere! Even better, Karen graciously agreed to conduct a wide-ranging interview on the Life and Times of R.T. Gault, which you can listen to or download here:

Richard Thomas Gault was known to most of his friends as “Ditch” Gault. He grew up around Indiana, Pennsylvania where his father, Thomas Gower Gault, was a Professor, and also served as Chair of the Geography Department at Indiana University of Pennsylvania. Ditch Gault was a true rennaissance man, surrounded by books, and he was an eternal student, having racked up college courses on every subject in the humanities for more than a decade without ever having earned a degree in any subject. In the 60s he was an enthusiastic member of the counter-culture at the University, and became obsessed with politics.

He spent many years amassing information on the Kennedy assassination, which he documented in an article called _The CIA’s big rub-out_, published in July 1975. But politics were only one of Ditch’s many interests, which ranged from history to philosophy to mysticism and the occult. Although he was a polymath, and an eclectic seeker of knowledge in many forms, he never limited his sources of information to any particular media or genre. He was just as interested in comic books and UFOs, as in more traditional forms of literary theory, psychology, and “hard” sciences. For Ditch Gault, it was the ideas that mattered, not the vector from which they arrived.

In the summer of 1976, Ditch Gault took a course on Literary Analysis, which is where he met his future wife, Karen Price. At that time, Karen was a sophomore and Ditch was a thirty-year-old eternal student, who continuously challenged and heckled the Professor from the back row of the classroom. Another student in the class was Susan Johnston Graf, who later went on to earn a PhD at University of Kansas. The three became close friends. In those days, Ditch could be frequently found in the student union, where he “held court” and discussed everything from religion to occult magic. Also around this time, Karen began to assist Ditch in typing up some of his papers and longer works, which included essays, bibliographies, and longer works of fiction.

Although he was interested in religious subjects, in mysticism, and in esoteric knowledge of all kinds, Ditch Gault was never satisfied with any particular form of organized religion. He read widely on the religions of the world, on Hinduism, Christianity, Buddhism, and Islam, and was especially attracted to Sufism. Ultimately, Ditch did not label himself or subscribe to any traditional religious practice. Instead he simply studied all forms of religious experience, dabbled in occult magic, and made a rigorous study of the Tarot. Ditch typically used the _Rider-Waite Tarot Deck_ in the traditional Celtic Cross spread, and would frequently read cards for friends. He also taught a class to a group of friends on the history and reading methods of the Tarot. Eventually these studies resulted in a series of essays and web pages on the Tarot, one of which was Ditch’s original method on how to use Tarot cards to read the I-Ching.

To make a living, Ditch Gault managed used book stores, book search services, comic book stores, and also wrote, although he never expected to make any money from writing. He had a modest source of income from a trust, which he received as an inheritance from his grandmother. It wasn’t much, but it gave him the leisure and freedom to be able to deal used books and comics and spend most of his time on his writing, reading, and research. He had quite a few correspondents, including people at the Alfred Machen society in London (active during the 1980s-90s), Brian Taves at the Library of Congress, and many others.

Ditch became interested in the Hermetic Order of the Golden Dawn when he was studying the life of the magician-poet, Yeats. Although he was quite familiar with the works of Aleister Crowley, Ditch was more drawn to the naturalism of Yeats. He was also an advisor, perhaps gadfly, to his colleague Susan Johnston Graf, as she worked on her book _W.B. Yeats Twentieth Century Magus_. Ditch’s review of the book can still be found on Amazon.

For his own website, Order of the Twilight Star, Ditch collected a gallery of photographs of the Order of the Golden Dawn members, and wrote concise captions for them. As he amassed all of this information on Arthur Machen, the Tarot, Talbot Mundy, esoteric literature, UFOs, mysticism, etc, Ditch began to develop a master list in the form of a bibliography. Ditch explained this project to Karen Price, saying that he noticed trends in the early to mid-60s, and that these trends were starting to re-occur. Based on his analysis, Ditch compiled Absolute Elsewhere purely for himself to keep track of the trends and connections that he perceived in the occult, fringe, and visionary literature of his time.

At first it was just a straight list of references, but later he began to include commentary about the sources, and to add images of the covers. In the end, Absolute Elsewhere provides both a chronological trail of mystical ideas, as well as a visual story of how those ideas appeared to the reader as they might have encountered them on book covers, movie posters, or other media between 1945 - 1979.

Karen Price, who was married to Ditch Gault at the time of his passing, still has all of his books and papers, including several novels in manuscript that were never published. One of these is called “Terraplane Woman,” and is set in Indiana, Pennsylvania. Another novel, “Cycle 21,” is set in Johnstown, Pennsylvania, where epic floods occurred in the late 19th Century, and where early sightings of the so-called Mothman took place, (later the center of a supernatural scare best known by the book, the “Mothman Prophecies.”)

“With Absolute Elsewhere Ditch was working through ideas and seeing how they intersected.” said Price. “He did it for himself as a way to make sense out of the world. And he just liked fringe.”

Many thanks to Karen Price, for introducing us to the creator of “Ditch’s Puzzle Palace,” “Order of the the Twilight Star” and “Absolute Elsewhere.”

A few links to R.T. Gault writings and websites: