Yes, it has now been 22 years since I last finished writing a novel. A short career that began during a delirious summer (amid a gaggle of noisy ducks and cases of Liebfraumilch) and lasted until confronted with rewriting my third novel for the fourth time for yet another agent who just wanted a bitter laugh, no doubt. Six years altogether, during which I earned less than enough to buy a cup of coffee every week, and yet demanded from myself the discipline of a fakir and the liver of Charles Bukowski. So you can imagine it is with no small irony or sense of unbounding freedom and joy that I can look back over the last 22 years and thank all the Bodhisattavas in the Western Lands that I have not got the itch to write another novel during the entire time! 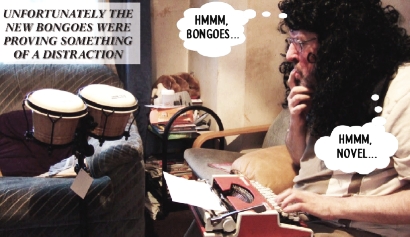 Except, of course, that I still sort of get the feeling every now and then. And what a creeping gooseflesh of terror that is! So I really have to thank Graham Charnock, one of the most entertaining jokers of British fandom, for his recent piece called “Harringay Lit,” which appeared in CHUNGA #14. As Graham puts it:

“I’d been visited by a group of characters I thought I’d invented, and after talking to them I had decided to tear up my manuscript because it was obviously so unbelievable.”

If only he knew how true that was for me as well! How clearly I can recall that morning back in 1986 in Woodstock, New York, when the phone call came through from that agent, whatever her name was, who wanted to see my manuscript.

Sipping my black coffee, I contemplated the scenario of submitting that 400 page colossus, when suddenly all of the overwrought characters from the book, with all their faults and fetishes along with their preposterous ticks and dialects came to life in my brain. I felt as if I was choking and drowning in the banality of that rotten prose, in the senseless brawling and the random lyrical pastiches (painted on too thick, with a floor mop instead of a sable brush), and that whole pile of verbiage began barking and howling at me like a wretched dog under the full moon…

I am telling you that during that moment of truth, when I solemnly picked up the stack of paper and dumped it directly into the rubbish bin, I freed all those bats out of my belfry forever! Devil take them, the bastards, for wasting two years of my youth!

No, if ever my fingers begin to itch over a keyboard and strain to deliver another long manuscript of maudlin rantings, believe me, it will be a completely different cast of characters… no doubt all of them equally mad, but nonetheless new and never to be found in my current file cabinet of themes and topics.

Once you’ve gotten over your writers block — and past those blasted bongoes — you know that the only possible redeeming value in your effort is to strike new ground. Yea, the human race goes on to choke on its own shit, but somewhere in the lunatic gleam in the eyes of a writer is an unspoiled landscape, and a new world to fashion from nothingness.