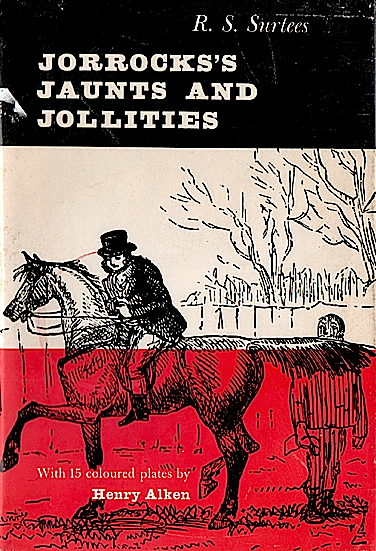 What a fitting discovery while badgering through the mountain of cheap book carts at Brattle Book Shop, when I happened across a fine copy of Jorrock’s Jaunts and Jollities. Originally published in 1838, this farcical book on fox-hunting and gad-about adventures, was written by Robert S. Surtees, who is an amusing stylist, to say the least. The overall tone of the book is very reminiscent of its predecessor picaresques, such as Humphrey Clinker, and it’s followers, for example Jerome’s Three Men On a Bummel… in which a cast of characters go off on a jaunt that allows the author to skewer them and the societies they are escaping from or escaping into.

What more can be said about a stylist who brandishes a fist in our face with an opening paragraph like this?

What true-bred city sportsman has not in his day put off the most urgent business — perhaps his marriage, or even the interment of his rib — that he might “brave the morn” with that renowned pack, the Surrey subscription foxhounds? Lives there, we would ask, a thoroughbred, prime, bang-up, slap-dash, break-neck, out-and-out artist, within three miles of the Monument, who has not occasionally “gone a good ‘un” with this celebrated pack? And shall we, the bard of Eastcheap, born all deeds of daring to record, shall we, who so oft have witnessed — nay, shared — the hardy exploits of our fellow-cits, shall we sit still, and never cease the eternal twirl of our dexter around our sinister thumb, while other scribes hand down to future ages the paltry feats of beardless Meltonians, and try to shame old Father Thames himself with muddy Whissendine’s foul stream?

The ball proceeded with the utmost decorum, for though composed of shopkeepers and such like, there was nothing in their dress or manner to indicate anything but the best possible breeding. Jorrocks, indeed, fancied himself in the very élite of French society, and, but for a little incident, would have remained of that opinion. In an unlucky moment he took it into his head he could waltz, and surprised the Countess Benvolio by claiming her hand for the next dance. “It seems werry easy,” said he to himself as he eyed the couples gliding round the room; — “at all ewents there’s nothing like trying, ‘for he who never makes an effort never risks a failure.’” The couples were soon formed and ranged for a fresh dance. Jorrocks took a conspicuous position in the centre of the room, buttoned his coat, and, as the music struck up, put his arm round the waist of his partner. The Countess, it seems, had some misgivings as to his prowess in the dancing line, and used all her strength to get him well off, but the majority of the dancers started before him. At length, however, he began to move, and went rolling away in something between a gallop and a waltz, effecting two turns, like a great cart-wheel, which brought him bang across the room, right into the track of another couple, who were swinging down at full speed, making a cannon with his head against both theirs, and ending by all four coming down upon the hard boards with a tremendous crash — the Countess Benvolio undermost, then the partner of the other Countess, then Jorrocks, and then the other Countess herself. Great was the commotion, and the music stopped; Jorrocks lost his wig, and split his Beelzebub breeches across the knees, while the other gentleman cracked his behind — and the Countess Benvolio and the other Countess were considerably damaged; particularly the other Countess, who lost four false teeth and broke an earring.

Not to mention the riding and hunting scenes:

_A stopper appears — a gate locked and spiked, with a downward hinge to prevent its being lifted. To the right is a rail, and a ha-ha beyond it — to the left a quick fence. Tom glances at both, but turns short, and backing his horse, rides at the rail. The Yorkshireman follows, but Jorrocks, who espies a weak place in the fence a few yards from the gate, turns short, and jumping off, prepares to lead over. It is an old gap, and the farmer has placed a sheep hurdle on the far side. Just as Jorrocks has pulled that out, his horse, who is a bit of a rusher, and has got his “monkey” completely up, pushes forward while his master is yet stooping — and hitting him in the rear, knocks him clean through the fence, head foremost into a squire-trap beyond! — “Non redolet sed olet!” exclaims the Yorkshireman, who dismounts in a twinkling, lending his friend a hand out of the unsavoury cesspool. — “That’s what comes of hunting in a new saddle, you see,” added he, holding his nose. Jorrocks scrambles upon “terra firma” and exhibits such a spectacle as provokes the shouts of the field. He has lost his wig, his hat hangs to his back, and one side of his person and face is completely japanned with black odoriferous mixture. “My vig!” exclaims he, spitting and spluttering, “but that’s the nastiest hole I ever was in — Fleet Ditch is lavender-water compared to it!

A jaunt to then and now that we happily recommend!