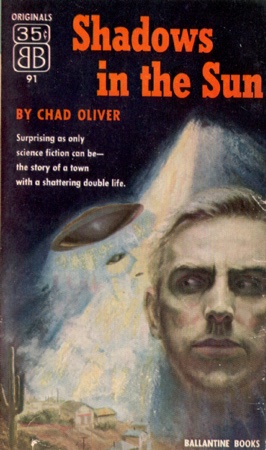 It was at a Boskone panel two years ago that Howard Waldrop and George Zebrowski turned me on to the works of Chad Oliver. I’m just getting around to reading an old copy of Shadows in the Sun (Ballantine Edition, 1954) which is literally disintegrating page by page as I read it. What an amazing story this is! I can certainly see why Zebrowski picked this title for Crown __Book’s Classics in Modern Science Fiction series. The strangely out-of-tune Jefferson Springs, Texas, at first seems to resonate with menace, like Invasion of the Body Snatchers (Jack Finney’s novel which was being serialized in Collier’s magazine later the same year, Nov - Dec 1954). 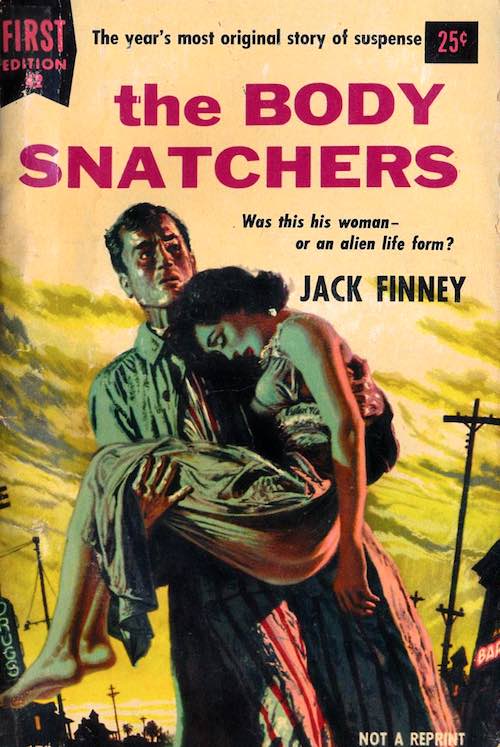 But then Chad Oliver’s story veers into unexpected directions, and though his prose is at times poetic, it is always clear and to the point. For example, here is the protagonist, Paul Ellery, reflecting on the human tendency towards urbanization:

What sane man would prefer to live in the shrieking chaos of a city, stacked in like sardines with his neighbors in the smoke and the dirt and the sweat? What sane man would voluntarily leave the sunshine and the green fields and the quiet companionship of home for a factory and a tenement and the grinding of machinery?_

Answer: almost all of them. Wasn’t it the thing to do? Wasn’t the city the place to go to get ahead? Wasn’t the city where all the smart people were? Weren’t you an ignorant hick if you stayed at home?_

There was nothing new in this. Man had always gone to the city. But he could be helped along if necessary, and he was. Psychological conditioning techniques, when administered by a really advanced culture, were remarkable things._

If you want to build an escape-proof prison, there is a way. Just don’t tell the prisoners that they’re in jail. Make them compete with each other for life-sentences.

Were these merely the musings of a good old boy from Texas, who preferred some fly-fishing to the latest trendy nightclub? Or was Oliver onto to something more sinister? Was he feeling a trend of social manipulation that was actually being implemented in boardrooms and hush-hush committees?

This does give me pause for thought (as an eternal city-dweller) that he might be onto something. Are there some malevolent forces at work, keeping us away from the farms and wide open spaces, and forcing us to crawl through crowds in foetid subway tunnels, or sit in miles of toxic automobile traffic? Well, it hardly matters, because somehow I think we would gravitate into these human hives on our own accord. There is no subliminal message needed, because we behave, without any prompting, like members of a mathematical formula, and either cluster together like honey-crazed ants, or spread out into mandelbrot sets of suburban tracts.

Though the city seems to have imprisoned me for life, it doesn’t stop me from dreaming about those greener pastures somewhere out beyond the edge of a Clifford Simak pastoral, but not so far as that strangely magnetic pond behind R. A. Lafferty’s place, or one of J. G. Ballard’s psychopathological desert verandas.

No, in the end it’s probably best to hang around here in my urban cellblock, to content myself with a free showing of Helvetica among the sea of unemployed design nerds at the Regent Theatre, and realize that homo sapiens are far beyond the pale of specialization and have long since moved into the infinite fractals phase. There aren’t any oases left, unless we build them. And we have a lot ‘splaining to do if we can’t start by rescuing our own ecosphere, our economy, and our basket case cities. Aliens are not going to arrive and take care of them for us. Unless, of course, they already have!

PS: anybody know who painted the cover for 1954 Ballantine edition, at the top of this post?