It’s great when one of your class-mates in college goes on to achieve well-deserved recognition. Such is the case for my cohort, Paul Copp, who was in the Chinese M.A. program with me at UMASS Amherst back in the 90s. Now he is a faculty member at the University of Chicago, and several years ago he had his major work on the magical spells of medieval Chinese Buddhism published by Columbia University Press.

Now I finally got around to reading his book, The Body Incantatory, and am quite pleased to discover how perfectly readable it is, despite having considerable heft as a scholarly examination of medieval Chinese Buddhism in it’s own right. The book takes an orthogonal approach to the topic, by following the trail of dhāraṇī spells as it weaves through the various sects, practices, and religions of China. 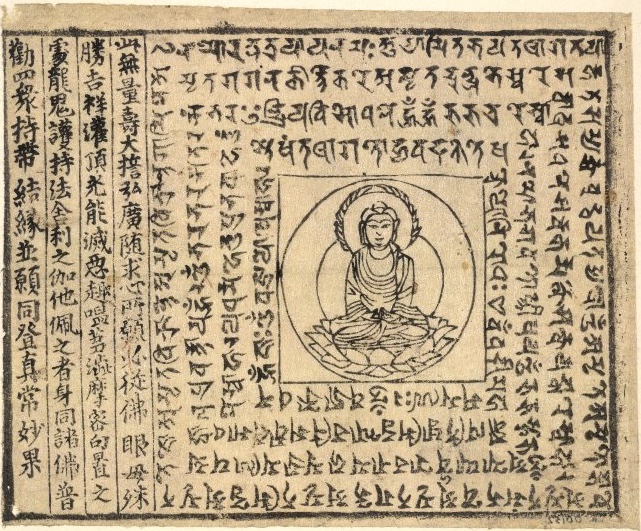 From the introduction we discover: “the details of Chinese Buddhist spell craft reveal veins in the Buddhist tradition — as well as commonalities among traditions — that are otherwise difficult to see. Despite their near invisibility in modern scholarship on Chinese Buddhism, the medieval Chinese Buddhists used (chanted, read, touched) dhāraṇīs and mantras nearly every day. This fact allows us to cut accross conceptual terrain of seeing Chinese Buddhism prinicipally in terms of doctrines, schools, festivals, deity cults, or sacred locales. Spell practices offer their own maps. (preface, xvi)

But what are dhāraṇīs and how do they work? In the most basic sense, dhāraṇīs are spoken spells, similar to (and sometimes acting as) mantras; the prayers and invocations used in Buddhist meditation practice. In this book, Copp examines the meaning of dhāraṇī at great length, providing many examples of how the word was explained in historical texts, such as in “The Treatise on the Great Perfection of Wisdom” [Dazhidu lun]:

The dhāraṇī is alternately “able to grasp” (nengchi), or “able to block” (nengzhe). As for being able to grasp, once one has collected all manner of good dharmas, one is able to keep hold of them so that they do not scatter or become lost. As for being able to block, the evil roots that [are wont to be] born in the mind are blocked and not born. If there is the desire to commit evil deeds, one will take hold and not allow onself to commit them. This is called “dhāraṇī.” (p. 22)

More saliently for me, personally, is:

the dhāraṇī of entering sounds. The bodhisattva who attains this dhāraṇī will feel neither joy nor antipathy upon hearing the sounds of speech. Even if all beings were to speak foully and curse them for kalpas innumerous as the sands of the Ganges, their hearts would not be angered. They rid themselves of angry thoughts by thinking: “If my ears had not encountered it, to whom would this foul sound attach?”. (p. 24)

In addition to a careful and penetrating analysis into the origins of the dhāraṇīs in Chinese history and their connections to Chinese religions, the Body Incantatory is primarily concerned with the practice of dhāraṇīs in daily life, such as writing the spoken dhāraṇī spells onto paper and braiding them to be worn as bracelets, or burning them and anointing one’s body with their ash, or writing the spells on one’s flesh in oil, blood, or herbal concoctions.

Copp argues that “more important than echoes of imperial practice… were connections with the broad and ancient family of Chinese amulets and talismans, a family that included medicinal drugs, alchemical elixirs, mirrors, fu-talismans, seals, and of course scriptures and spells.”. (p. 47)

In the midst of these colorful explorations of dhāraṇī practices, Copp also fills his narrative with numerous asides on topics such as the rich tradition of “travel magic.” Since the creators of these dhāraṇī techniques had to venture into the wilds in search of spirits and magical substances, and consequently had much to fear from demonic machinations in remote places, the importance of travel magic is not surprising.

The middle section of the Body Incantatory examines the archeological evidence of how Buddhist dhāraṇīs were used in the form of protective spells and amulets. Copp explains in great detail the discovery of several major finds. One of these was a Tang Dynasty tomb excavated in 1944 on the campus of Sichuan University, in Chengdu. In the tomb they found a skeleton still wearing a silver arm-band that concealed a tightly rolled up printed dhāraṇī amulet.

Copp also provides a variety of interpretive studies of the amulets, their composition, their visual design, their self-containment or relationship to the bearer of the spells, and their context in the larger sphere of Buddhist printed matter, mandalas, sutras, and shrine objects. How fascinating to think about dhāraṇī pillars, with their special connections to wind, to shadow, and to dust. Spells are not only spoken by human beings, but are swirling around us in multi-valent and mysterious ways!

This is further explored in the “Transmission of the Mystic Store” [Chuan mizang] by the monk Zanning, in which he says that the old translation of dhāraṇī was “to grasp” and the new translation is “nature.” In essence, the connection of the spell to the practitioner has swung from one’s own voice to the music of the spheres, from one’s own mental projections to the very forces of Nature in the Universe around us.

For anyone interested in the practices of spell casters in Medieval times, or interested in Buddhist iconography, rituals, and daily practice, this book will provide you many new and fascinating examples. For those students and practitioners of Buddhism who have traveled through the mountains of doctrines, and been lost in forests of sutras, gong-ans, mantras, and symbology, you will be delighted to find whole new realms to explore. The title, as one expects from a wordsmith such as Paul Copp, does the book justice; it is indeed a Body Incantatory, it is an incantation embodied, and a transcendental magick unraveled from small bits of ancient religious emphemera.

“It is proper here to speak of the imagination of “incantatory bodies.” Here I mean both the tales of the transformed bodies of the practitioners and the incantatory “bodies” of sound, light, and substance — the spells themselves — that were said to enable these transformations.” (p. 145)

As the philosopher and sorcerer Allyn B. Brodsky would have pointed out, this dual aspect of the transformed Self and the spells themselves, is one facet of the ego / identity interface. At that interface, the manifestation of our mental energies and intentions will interact with the perceived Universe into which they have been cast. Identity, then is a sort of a spell, an incantation, an invocation of who we wish to be and who we perceive ourselves to be. Until, of course, the blasted tower smashes such fragile shells to pieces, and the ego starts all over again.

In the pages of The Body Incantatory, hermetic circles are drawn, deities invoked, elixirs quaffed, and thunderbolts thrown. Stir up a nice cool batch of elixir vitae, and take a tour of medieval spell casting in this remarkable and delightful book. 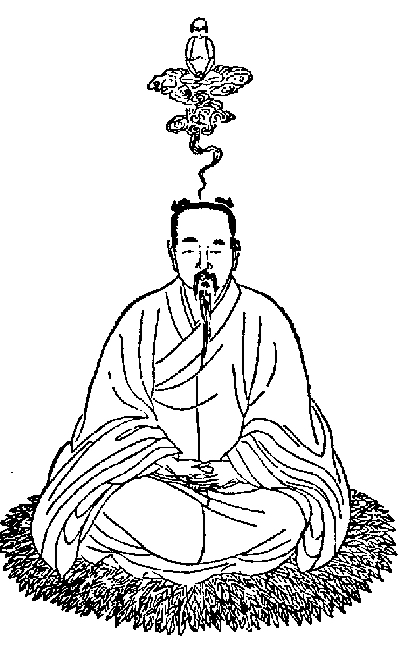