In recent weeks, I’ve been on a biography reading jag, first tearing through The Hidden Library of Tanith Lee, then James Tiptree, Jr., the Double Life of Alice Sheldon, and This is Me, Jack Vance!

The Hidden Library of Tanith Lee by Mavis Haut begins with a heavy academic tone, delving into the mythopoeic layers of meaning in Lee’s writing.   Although this is perhaps a necessary piece of work, since Lee’s writing is so dense with mythology, metaphor, and explorations of the subconscious, it doesn’t exactly flow off the pages. Fortunately, for all those pages which made me feel like I was treading in molasses, there were an equal number of more conversational sections, in which Lee’s many books in many genres are summarized.   There is also a long and valuable interview with the author which I have not seen elsewhere.   Not a book for everyone, but a must read for all of you Tanith Lee addicts out there, and I know you are legion!

It has taken me years to get up the nerve to read Julie Phillips book on James Tiptree, Jr., one of the unique voices in sf literature.    Perhaps other readers of sf in the 1970s had the same introduction to Tiptree that I did:  reading through 800 pages of Again Dangerous Visions, edited by Harlan Ellison, only to be shocked with 50 amp jolt of electricity in the concluding story, Milk of Paradise, which opens:

“She was flowing hot and naked as she straddled his belly in the cuddle-cube and fed him her hard little tits.  And he convulsed up under her and then was headlong on the waster, vomiting.“

This was clearly a writer who could grab anyone by the scruff of the neck and rattle them around like a rag doll.

Of course, we now know how ironic this must have sounded to Tiptree, who in “real” life was Alice B. Sheldon, a woman writing under a man’s name.   But until you read Julie Phillips book, it is unlikely that you will understand the psychological depth of this “double life,” and the extent to which Sheldon’s pseudonymous personality created complications in a life that was already tortured by self-doubt and a myriad of other problems.   I suppose that I was resisting this book, despite many rave reviews, because I feared the traumatic ending, when I knew that Sheldon would take her own life.

What I didn’t know was that Julie Phillips had written such a flat-out brilliant biography.  From Sheldon’s colorful childhood on safari in Africa, to joining the WACs in WWII, to wild times in San Francisco and New Mexico…Phillips has envisioned the life of her subject to much richer and more delightful level of intimacy than I thought was possible.   And she is working with difficult material…

Not only was Sheldon bifurcated by her self-generated identity as a male sf writer, but she also spent a lifetime wrestling with more fundamental identity issues, not the least of which was her gender and sexual orientation.   Sheldon was a woman who spent years of her youth being toted around Africa, photographed beside the bleeding corpses of elephants and lions, and trekking through jungles to experience peoples and cultures that her fellow Americans saw only as stereotypes on newsreels and in Hollywood potboilers.

But she wasn’t such a delicate fading violet; her main complaint on safari was that her parents would not let her carry and fire her own shotgun.   This seemed awfully unfair, after all, since her flamboyant mother, Mary Hastings Bradley, had occasion to sit down upon a lion that was not quite dead and when it reared up with a terrifying final roar she cooly fired a coup de grace round into the beast’s heart.   Back home at their Hyde Park penthouse in Chicago, Mary Bradley decorated with trophies from their African adventures, and spent a lifetime writing popular novels and speaking about her travels.   How do you grow up in the shadow of such a Mom?

That is one of the major themes in Phillips excellent biography, along with Sheldon’s marriages, intellectual life, and career as a photo-intelligence analyst / artist and science fiction author.  Although it didn’t bother me, some readers might be a bit confused by Phillips variable use of “he” or “she” throughout the book, as a way of instantiating the Tiptree / Sheldon identities.    Ultimately, I think the tactic works, and is handled objectively, along with the other aspects of Sheldon’s life that might otherwise have been easy to over-dramatize.

For example, when Sheldon is living in New Mexico and sells a painting in a gallery show (a nude self-portrait), she immediately uses the money to buy herself a top-notch shotgun.   A myriad of details like this are handled as casual asides, though they piqued my interest to the point that I wanted to know what sort of gun Sheldon bought:  what was that Fox double-barreled, choked, CE 20 gauge shotgun?   Of course, it was virtually the same gun that Teddy Roosevelt took on safari in Africa after leaving the presidency, differing only in that Teddy’s FE grade was made with gold inlays, personalized monograms, and stocks made of “four-star” Turkish Circassian walnut, instead of the “one-star” Turkish walnut  and silver engravings supplied with Alice’s CE grade shotgun. 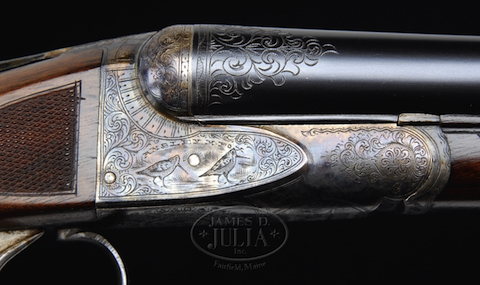 And yet, the fact that Sheldon was familiar with guns, from her childhood safaris to her adult hunting and target practice, takes on a morbid edge when we consider that she often spoke of suicide and of having her .38 caliber pistol at hand.  There is an added edge to this potential for violence:  Sheldon spent much of her life taking prescriptions such as benzedrine, dexadrine, and other mind-frazzling drugs.    Despite the tragic conclusion, I can only admire the great scholarship and fine writing that Phillips accomplished in the “Double Life of Alice B. Sheldon.”

On a much lighter note, I picked up “This is Me, Jack Vance! (Or more properly, This is I!).”  Vance was born in 1916, and though he has been blind for decades, he is still happily with us on this Memorial Day weekend of 2012, at the sprightly age of 95.   After listening raptly to the long interview with Vance posted by StarShipSofa (2010), I was keen to read Vance’s autobiography.   As one of sf’s most beloved story-tellers, it is fascinating to hear him tell about his own life, which was not altogether different from his picaresque narratives.

Born in California, Vance’s family was fairly well-to-do.  His grandfather, Ludwig Matthias Hoeffler, was a wealthy businessman, who purchased and installed the iconic pugilist statues that front the Olympic Club of San Fancisco. 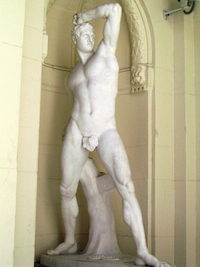 But, owing to the stock market crash and some manipulative relatives, Vance was virtually penniless when he graduated high school.   Throwing his shoulder to the grind-stone, Vance worked as seasonal fruit-picker, a “monkey-suited” elevator operator, a mining laborer, and in many other odd jobs.    His eyesight was problematic from an early age, and when WWII came around, in order to avoid a deferment based on that, he memorized the eye chart and joined the merchant marines.

After traveling the world on several voyages, Vance enrolled at UC Berkeley (which offered free tuition for California residents back in those halcyon days of Robber Baron dog-eat-dog capitalism…but then today…wait!?  oh never mind…)    Vance was interested in journalism and his social life centered on the offices of the Berkeley newspaper, The Cal.   It was there that he met two energetic women, one of whom changed the course of journalism, and another who met a terrible fate in the skies over Jangipara, India.

Marguerite Higgins was the tough woman journalist of WWII, working in London, Paris and Germany.  After the war, she was posted as bureau chief in Tokyo for the New York Herald Tribune.  Although she was one of the few correspondents writing from the region when the Korean war broke out, she was ordered to leave by General Walton Walker, who said there was no place for women at the front.   However, instead of meekly packing her bags, Higgins appealed directly to Gen. Douglas MacArthur who agreed to let her stay on the scene and sent a telegram about his decision to the Tribune:  ”Ban on women correspondents in Korea has been lifted. Marguerite Higgins is held in highest professional esteem by everyone.”   Higgins went on to be the first woman to get a pulitzer… 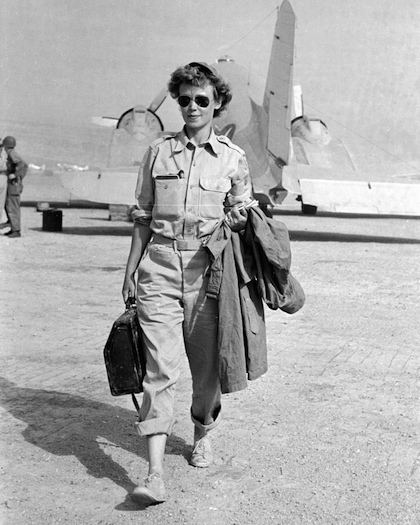 Higgins’ and Vance’s friend at The Cal, Anita Whistler, met an untimely end.   She had been teaching on an exchange program in Malaya, and was taking a commercial flight on the Singapore - London route [May 2nd 1953], riding in the first production passenger jet, the British-made de Havilland Comet.   As the aircraft was leaving it’s scheduled stop at Calcutta, it was hit with a sudden monsoon rain and disintegrated over the nearby town of Jangipara.   Only 31 years old, Whistler was lost along with all on board, in an event that led to the total redesign of how the fuselage of jets are constructed, and subsequently paved the way for the success of the commercial jet age.

Vance’s autobiography contains a myriad of similar details and anecdotes about his travels.   His style is easy going and fascinating, much like his fiction… light reading that is impossible to put down.   From the pastiche of memories and adventures, it is possible to get a glimpse of Jack Vance the science fiction author, who casually transforms his day to day experiences into far flung adventures and fantasies.   He maintained a rigorous writing schedule (2000 words / day), along with his wife, Norma, who typed up and helped to edit all of his books.   It is easy to picture them, working from the veranda under a thatched roof in Tahiti, or paddling through the lily pads from their house-boat in Kashmir, and to add another wrinkle to the vivid tales found in Jack Vance novels.