Readercon is generally my favorite con of the year, and in 2015 Readercon was up to the usual standard of fun times and excellence.

The guests of honor Nicola Griffith and Gary K Wolfe were on hand throughout, and the memorial GOH was Joanna Russ. How could you go wrong? Indeed there were no less than three sessions on the life and work of Joanna Russ, including the participation of the author’s long-time associates: Jim Freund, David Hartwell, Michael Dirda, Ron Drummond, and Samuel R. Delany.

Freund told some great stories about the early days of his career at WBAI Radio in New York, when he was literally living in the station offices, and broadcasting his radio show, “Hour of the Wolf,” five days a week at 5:00am. One time Freund called up Russ at about 8pm and invited her to join him for an interview on Hour of the Wolf. Russ declined the interview, but she did invite him out to eat at a nearby diner. The meal turned into an eight hour long conversation.

Finally, having talked through the night, at about 4:30am, Russ asked to stop over at the Radio Station to use the bathroom on her way home, while Freund was getting ready for his show. Just as he was going live, Russ stopped by the control room to wave good-bye, and she heard Freund say into the microphone: “This is the Hour of the Wolf, and my guest today is Joanna Russ.” The first words Russ spoke on that particular live broadcast were: “You motherfucker! I’m going to kill you!”

Which she subsequently did, by killing off the character based on Freund in her novel, We Who Are About To.

Michael Dirda reminisced about his days at Cornell, where he and Joanna Russ became friends, and how she gave him a crash course in Science Fiction criticism when he first began to review SF for the Washington Post. David Hartwell told stories about what a dynamic and fun person Russ was to be around, for example, the night when she corralled some of her fellow writers and got them all to contribute lines to a story that she decided to compose on the spot: _Useful Phrases for the Tourist_ (1972)

In this pastiche of a tourist booklet, we find some memorable lines such as: “Madam, this bed/nest is alive,” “My head is not interchangeable,” and “At what hour does the lovelorn princess fling herself into the flaming volcano? May we participate?.”

Hartwell pointed this out as a way of balancing the customary view of Russ as determined, combative, and intense. She was all those things too, as Ron Drummond added with a short reading of a wonderful anecdote from his student days at University of Washington.

In one of Russ’s lectures, she explained to her students how Herman Melville’s career trajectory took a downward spiral after the dismal sales of Moby Dick; ironically, the most famous of his works more than a century after his death. While his advance payments had been continuously rising up until Moby Dick, in his subsequent novel, Pierre, they shrank, and when he submitted the following novel, Isle of the Cross, his publisher actually rejected the manuscript. Furious at this turn of events Melville burned not only the submitted manuscript for Isle of the Cross, but all of his draft copies and notes as well, thus destroying the book for all time.

At this point of the lecture, Joanna Russ said that if she had a time machine, she would travel back to to visit that author. Not in order to save the manuscript of Isle of the Cross from the flames, but to strangle Melville for having destroyed it. This image of Joanna Russ, acting out the strangling of Herman Melville in front of the classroom by wringing his imaginary neck, was the perfect characterization of her intense relationship with literature and and a demonstration of her passion to correct the errors of literary history.

Another great panel this year was a tribute to the publication of Dhalgren by Samuel R. Delany, first published forty years ago in the famous Bantam Paperback edition. 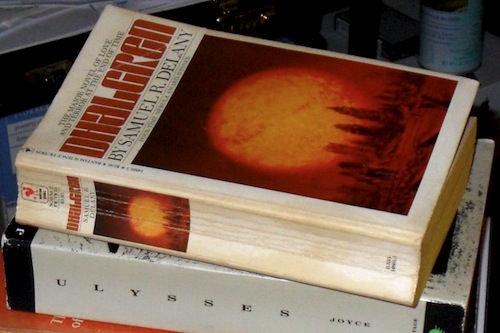 Dhalgren is an intense book, to which each person has their own unique and strong reactions. Shira Lipkin said that she first encountered Dhalgren after ending up in Las Vegas, Nevada, and living with a rough crowd of drug-using punks. “I was having my personal apocalypse at the time, so it seemed to make perfect sense to enter the city of Bellona.”

John Stevens discovered Dhalgren when he asked a teacher, who had been giving him science fiction recommendations, to suggest something “more challenging.” What the teacher gave him was Dhalgren. “That set the bar very high,” Stevens said, “and when I finished Dhalgren, I asked for something else to read on the same level of literary excellence and challenge. At which point he handed me a copy of Ulysses. So as it turned out, Dhalgren not only turned me on to the possibilities of science fiction, but to highest standards of literature itself.“

There were several other really great panels that I attended, including one on Mystery and Speculative Fiction Crossovers. In the Mystery panel, Greer Gilman was in fine form, reeling off observations such as:

“Fantasy reifies metaphors. There really _is_ a black tarantula on that slice of angel food cake!” Or: “In the SFnal mystery story there is an underlying tension between the soluble and the insoluble. You can actually solve the mystery, but you cannot solve the World that you are in.“

Then in the Anthropocene panel, contemplating the fate of our own planet Earth, Michael Daley asked: “Are we merely mammals? Or as Human Beings will we make use of our consciousness to stop these destructive behaviors in time to save our species?”

Vandana Singh, a particle-physicist by training, had some great points to make in this session. “Are we in the Anthropocene, or in the Capitalocene? What we are missing in Capitalism (and all the other -isms) is the relationship of humanity to Nature. Can we remove the delusion of being separated from Nature in time to save ourselves? We must decide, do we want a world that is hot as Hell and completely unlivable? Or do we want a world that is very inhospitable, but where we can at least scrape by as a species? I think this is an opportunity for SF writers to show their revolutionary potential. By presenting scenarios of survival as communities, we can inform people of the chances that humans may still have.”

Deluca was less optimistic: “What is SF’s revolutionary potential? I’m skeptical about us writers being able to change these enormous systems that are firmly entrenched.”

Michael J. Daley wondered: “What is the best motivator (as a theme in SF)? The terror of total destruction, or hope for technological solutions? Maybe in the latter category we could think about Solarpunk…”

Vandana Singh concluded: “Technological solutions to global climate change won’t work unless they include social solutions. The bottom line for or survival right now is that we must get off our addiction to fossil fuels.”

Wandering around the con, I ended up chatting with Frank Wu and Ted Chiang. Wu asked Chiang how he came up with the idea for the story Exhalation (published in Lightspeed). Ted said there were two main inspirations for the story, the first being P. K. Dick’s story The Electric Ant, which begins with the protagonist injuring his arm and going to see the doctor to have it patched up. The doctor scans him and says: “Well, I can’t treat you because you are a robot, so you will have to go see a robot repair specialist.” Shocked to discover that he is not a human being, the protagonist gets his arm fixed at the robot repair place then goes home to look up his own specifications on the central computer. Given a certain sequence of pressure points, he then proceeds to open himself up. His midriff splits open and he is astonished to see, in fact, that he is a robot, full of wires and clockwork mechanisms, at the center of which is a small punch-tape slowly unreeling through a spool.

The second inspiration for Exhalation was in a section of a novel where there is a long digression about the physical nature of the Universe, and in which it is explained that people don’t eat food to obtain energy. It is pointed out that food is a very low entropy energy source, and that having eaten food, people actually radiate heat and energy at a much higher rate of entropy. This low energy to high energy phase change is what inspired Chiang for the argon in Exhalation.

This was a great introduction to Chiang’s story, which I read the same night and very much enjoyed. Especially the way in which Chiang adapted the P. K. Dick idea of the robot opening his mechanism up to look inside. In Exhalation, the main character sets up an elaborate surgical apparatus so that: “I would then be able to dissect my own brain… the most beautifully complex engine I had ever beheld.” Very interesting!

One unexpected event at this year’s Readercon, was a whole room full of free books. Long time fan, John H. Costello, passed away in 2015, and his book collection was set up for anyone to sort through and take home. 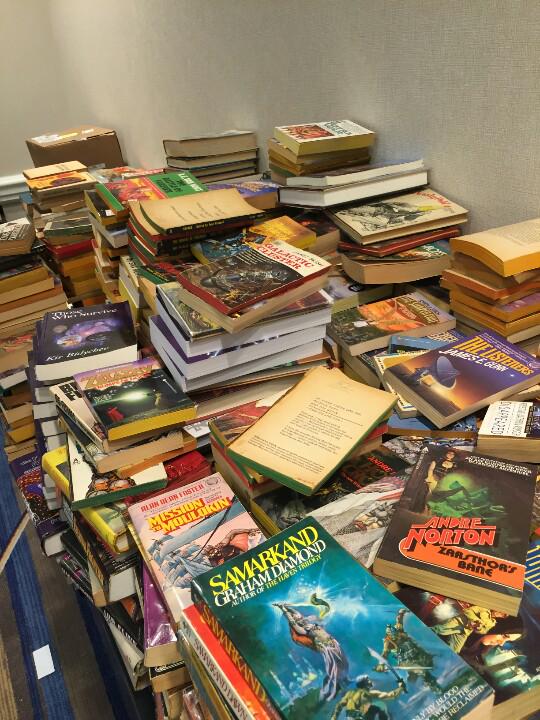 Costello, in addition to be an archeologist, was a translator, who published some English editions of the Russian SF author, Kir Bulychev. Among the cool finds that I dug out of the various piles and boxes of Costello’s collection, was a rare copy of _Chto nashe zhizn?_ [What is our life?] … the signed copy #32 out of an edition of 500 copies. 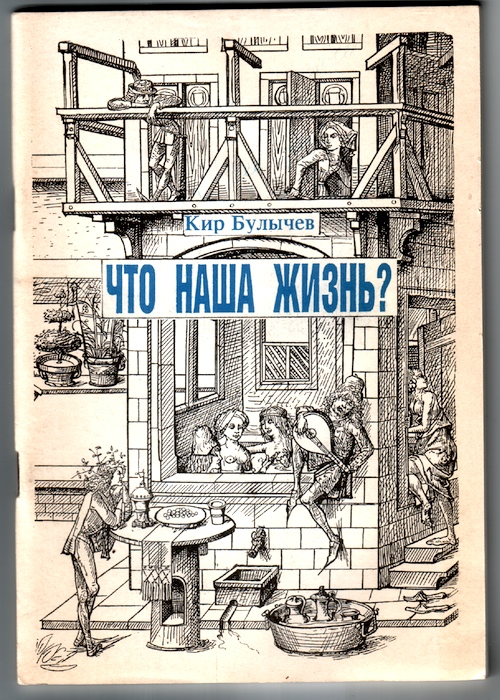 This strange little book, along with some other eye-catching treats from back in the USSR that I found in the Costello collection, are worth pursuing in a follow up post, so keep tuned to channel Yunchtime! And thanks to John Costello, who seems to have been a fellow that I would have enjoyed talking to, and whom I regret not having met on this particular journey.

Mixing with the great people in attendance, of course, is what makes the con. And I really enjoyed catching up with Dianne Weinstein, Mark Borok, Chip Delany, George Morgan, Arielle Saiber, Neil Clarke, Scott Edelman, Darrell Schweitzer, and Ed Koenig. I also met two editors, Tom Easton and Will Whalley. It’s hard to wind down afterwards, and realize that a whole trip around the sun will transpire before Readercon 27. Considering the recent Sad and Rabid Puppies slates kerfluffle, which swept up many fanac hours over recent months, Readercon was completely upbeat. I barely heard any mention of the Hugo slate controversy, with the exception of a few comments in the Who Owns SF panel. It was really a relaxcon this year, possibly helped along by a bunch of fans kicking up their heels at the 80s dance.

For me, it was a fine new pile of treasures to read, and a fine time with my fellow travelers of the SFnal Universe. Aloha, everyone, and Mahalo!