There are plenty of rumors about Hawaii, about rum-operations in the Caribbean, and a hidden fortress on the Moon.

Believe any or all of them, if you want.

The fact is, that no 150-kilogram monsters are welcome on this ship, unless I wrestle them on board myself. It’s a new paradigm in this time-scape.

While the yellow sun is painting the stark tree branches in New England, setting under frozen skies, we’re down here in flip-flops. The red bougainvillea blossoms are wrapping the dry adobe walls. The geckos are lurking like blue bats on the ceiling, chirping occasionally and turning their eyeballs on little stalks.

You can hear the ristras of red chili drying on the string that is nailed to the front door. Only now and then, does the wind rustle up from the canyon along the mesa. Then you’d swear a coyote was calling from a far way off. But what coyote? If there is one, she’s sleeping in the late afternoon sun, on the other side of this yucca plant.

Currently, my stomach is a little off… I think it was the biscochito milkshake from Blake’s. That is when you know that it really is better to stick with a vegan diet. You don’t have these off-kilter experiences with non-GMO milkfat, for one thing.

For another, you have a salad like this as your entree! 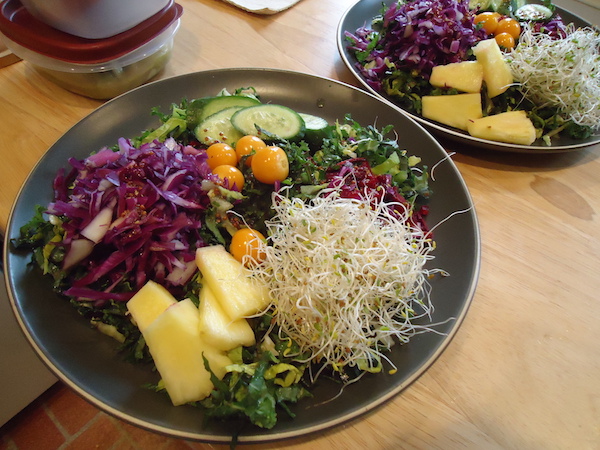 If you eat like this, you can avoid the murky hangover that processed foods give you. You can avoid the negative fallout of those who would keep you down, and completely escape the Curse of Lono.

When the thunderclouds come banging on your windows, and flip the coconut-fiber filters off the swamp cooler on the roof, you won’t need to grab the Samoan warclub and do battle with any strange gods. It’ll be just another day on the ranch. The jeweled lizards will get tired and disappear back into their trenches. The travelers will check in to the motor lodge. The tentacles of the octupus car wash will curl up and go to sleep.

You can step off the deck of the Humdinger and brew a cuppa pu-erh tea, from an old dried brick of tuo-cha some scholar left on the kitchen counter. (I wish she’d taken her donkey with her, too, for pity’s sake! At least the beatnik who left a few boxes of junk on the porch had the good sense to spice it up with underground comix…)

But let’s not quibble, a good evening cuppa, in the twilight of this planet Earth, is a kindness.