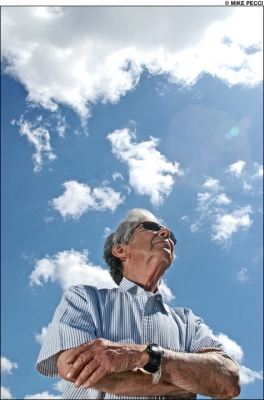 An interesting article by James Parker in this week’s Phoenix recounts Jack Borden‘s life of cloud gazing. Struck by an amazing epiphany while lying on a grassy slope in 1977, Borden suddenly experienced the entire sky as direct connection with the cosmos. According to Jack, he was… “just waking up from a nap, and - there it all was! Close, out-of-scale, real close. It was scary. I looked at it for not longer than three seconds and I had to look away. It just plain blew me away! This tremendous scene, somewhere between majesty and frightfulness - it was as if the sky were saying, Goddammit, if I couldn’t do anything to wake you up, maybe this’ll do it!” After this satori, Jack went on to found the non-profit, For Spacious Skies, which has promoted the art and benefits of cloud gazing for more than twenty five years.

Of course we all have our moments of connection with the cosmic wonder of the skies, but Borden’s single-minded mission to promote the healing powers of the changing cloud-scapes strikes me as all the more essential in a world where the attention of human beings is constantly diverted, attenuated, and channelized in deliberate and pernicious ways. Not counting the hours spent at work, the majority of people in the so-called “developed” world spend a great deal of their own time driving automobiles and watching television.

The task of driving, naturally, requires full attention (though this apparently is not very well-practiced judging by the careening, cell-phone babbling, hair-styling, food-gobbling, child-slapping, dog-scolding, and otherwise carelessly crashing idiots that I see behind the wheel every day!) And inside of all these vehicles there is scant occasion to gaze at the sky. Perhaps a mere glimpse of some mind-bendingly beautiful sunset of saffron rays and rose tinted clouds is caught in between a giant plastic food-chain sign and a screen of traffic signal armatures…that is all most people have of the sky from their vehicles. And as for television, let us just say that the maddeningly jump-cut radiations of images, together with hammering snippets of music amid violent cacophanies, is not going to lower the brain-dead zombie demographic any time soon.

But the sky! The show of shows! An endless shifting marvel of light, color and drifting cotton is piled up to the heavens, and we have only to step outside and tilt our necks to have it all for free. This, indeed, is the cure for the Internet! It’s always there for us, nobody owns it, it exists in eternal unfettered freedom, and thus draws us all into dreams and cerebrations. In the Tarot deck the clouds are used to depict the element of Air, as seen in the suit of Swords. From the serenity of the Queen of Swords, to the agitated fury of the Princess, the clouds reflect our state of mind. 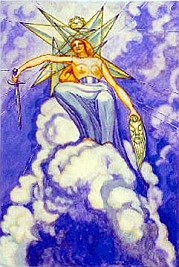 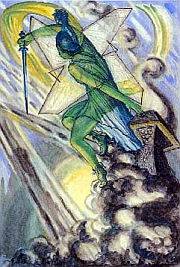 What is it about the clouds that inspires us to ponder? Their slowly twisting majesty, their mysterious shapes that constantly elide one another then disappear into the vaporous twirls of a dragon’s mustache. Is that it? Or is it some deeper connection with our souls, a reminder of the nebulous and undefinable nature of our existence? Yes, perhaps those clouds remind us that we, too, are nothing more than ephemeral shapes gliding through the imagined landscapes of our own thoughts.

And like stormy skies, when our thoughts are embroiled in dark writhings, thunder and lightning arrives with supernatural fire. ZAP! There is a thunderbolt for your consciousness. You are free from those imaginary constraints. In the pouring rain, you dash forward to reach the other shore. Your mind is clear. The clouds break. Shimmering light begins to glow within the banks of white clouds. Everything becomes astonishingly obvious and sparks seem to fly from your eyes…

You whirl around in the amazement of realization…and you are left standing face-to-face with the simple (and at the same time, ultimate) reality. So life begins! 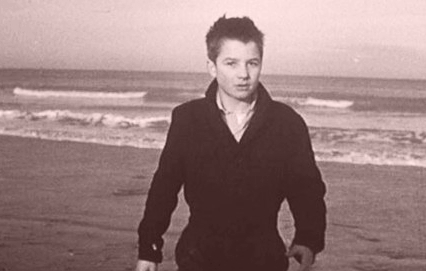