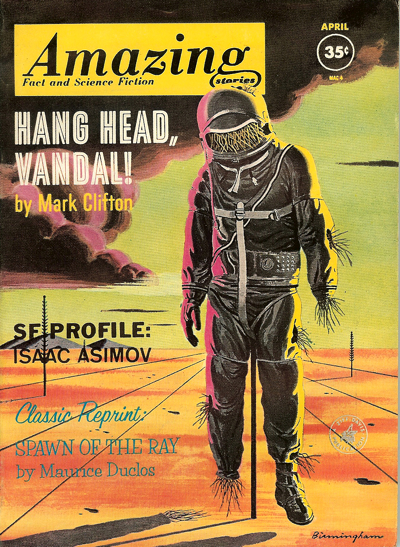 Another artist who appeared briefly then disappeared into the woodwork of the illustration world was Lloyd Birmingham, who created one of my favorite covers from the early 1960s. His illustration for Mark Clifton’s story Hang Head, Vandal! (April 1962) has always fascinated me. It’s an image of a spacesuit being used as a scarecrow, propped up on a post so that it floats above a flat plane by a few inches. Tufts of straw are poking out of ragged holes in the suit,which is missing it’s left hand and right foot, and more straw is brimming out of the open visor of the helmet.

The flatly rendered landscape, made up of a few perspective lines trailing away into the distance, and the strange lime green sky beyond a cloud of purple and black, are like cartoon backgrounds, while the harsh pink and yellow highlights on either side of the gray spacesuit keeps our attention locked on the central figure. At first glance, it looks almost like a corpse. But after a second look, the scarecrow suit is strangely eerie. The overall effect becomes psychological, and could just as easily have illustrated a story by J. G. Ballard as Mark Clifton.

Clifton, in fact, worked as a corporate psychologist. He was clearly one of the best writers dealing with psi powers, as Barry Malzberg and Judith Merrill demonstrated in their great anthology: The Science Fiction of Mark Clifton.

Birmingham painted at least a dozen other SF covers during the early 60s, for Amazing, Fantastic, and Analog. Among those my favorites are the covers for Plane Jane in September 1962, and Spawn of Doom from December 1961. These images also have floating figures. In the case of Plane Jane, a woman with closed eyes seems to levitate diagonally amidst a three dimensional matrix of colored planes and spheres. In Spawn of Doom, a space-suited figure is floating through a shattered window towards a display case which holds a strange volcanic rock, and out of the rock a pseudopod of red tendrils has broken through the glass of the case. 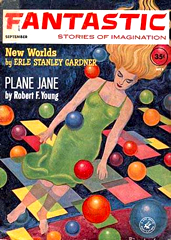 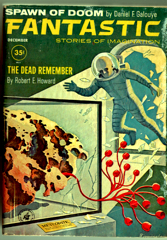 All three of these covers achieves a wierd effect without excessive violence or dramatic expressions, which is probably why I liked them so much. Other covers of interest were the illustrations for Sunfire (Sep 1962) and The Unteleported Man (Dec 1964). Although Birmingham’s other covers were sometimes funny, they never achieved the same impact. 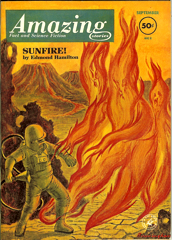 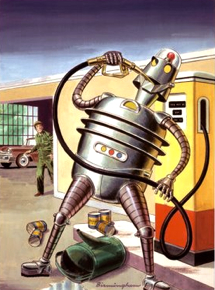