Because I never watch television or read magazines,  I am quite slow to notice emerging trends in pop culture.  That is why a had such a shock this weekend when we were driving on a highway ramp towards the airport and a gigantic billboard loomed over me, asking in texting language: “R U Bot or Not?”

This seems innocuous enough, in an age when humanity dreams of the singularity and yearns for artificial bodies to escape from the ugly realities of biological existence.   All the more mundane, perhaps, when men start to marry

anime characters, sex robots, and pillows, rather than try their luck with real human companions.  Should I even be shocked?

But it just so happens that the very same day, I had finished reading David J. Skal’s _Antibodies_, a book that deals with a cult of self-destructive full transhumanist transplants.   As only Skal can, he weaves a hypnotic and disturbing tale around the people who would shed their biological “meat bodies” in exchange for synthetic prothesis, and the others in society who would supposedly “heal” them from their obsession.   There is nothing quite as terrifying as the perfect prose of David J. Skal when he is on a roll (see, for example, his debut novel _Scavengers_, which is a very twisted book indeed); and it was just after the horrifying conclusion of Antibodies that I encountered the R U Bot or Not Billboard.   It sent shivers up my spine! 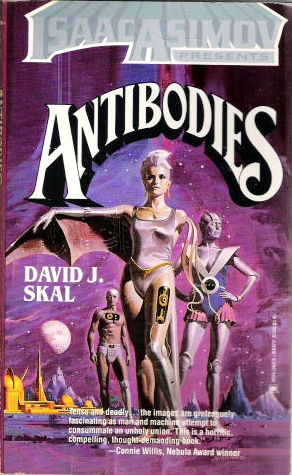 By the way, the Vincent DiFate cover for the paperback original of Antibodies is spot on for the story!

It’s hard to begin to describe how creepy this ad campaign is, going beyond the objectification of women to the imaginary design and construction of synthetic sex partners.   Nothing new about this, as the scribblings on any Junior High school desk will demonstrate…but as a global advertising campaign to sell Vodka?